A few residents reported “blobs” growing underwater on their docks and boat lifts late last summer.  They looked something like the blob in this picture.  Yikes! 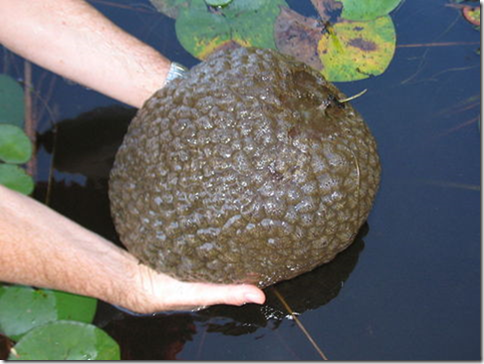 As is turns out, this strange thing is not so bad.  Eugene C. Braig, Program Director, Aquatic Ecosystems at The Ohio State University says it’s bryozoan colonies.  His summary is that “freshwater bryozoans are generally harmless.  Colonies’ ability to clog the intake of equipment that needs to draw water (pumps, etc.) is probably the biggest associated concern.  If anything, freshwater bryozoans imply at least something good about water quality: as aerobic animals, they can only persist in oxygenated water; as filter feeders, they can help to improve water clarity if they occur in relatively high density.” On the other hand, he says that bryozoan colonies don’t put up much defense against being colonized by other organisms.  He advises no one deliberately eat bryozoan colonies.  Good advice if this crossed anyone’s mind!